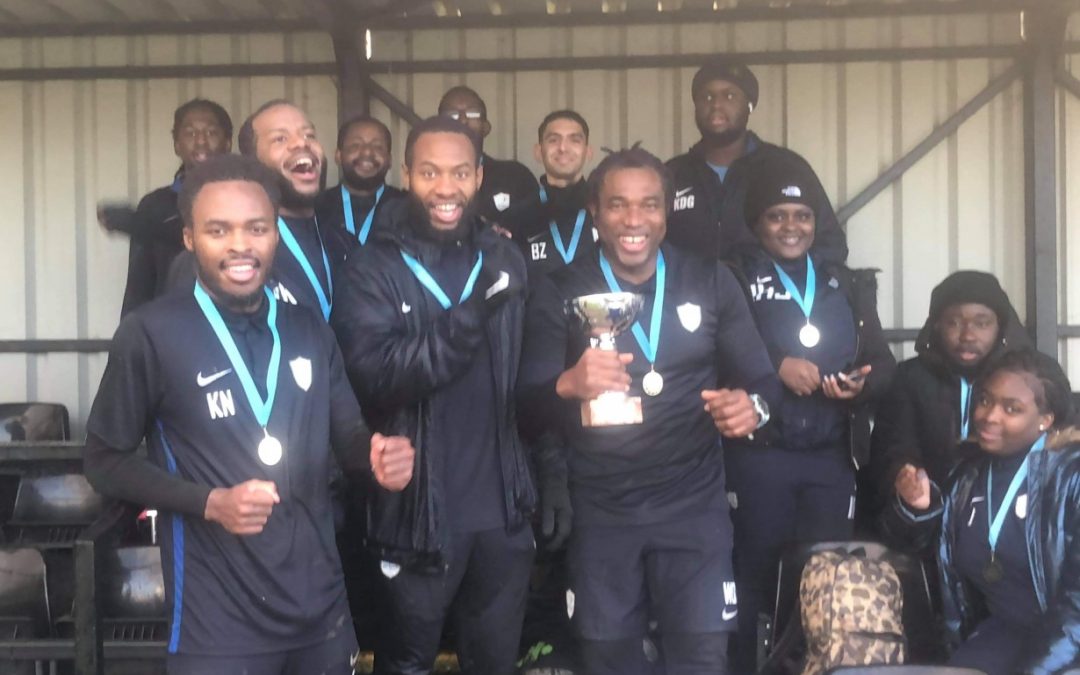 The gamesmanship started a week prior with misinformation from WO Management (20 players……) on the squad size for the Parents and so successful it was, in the minutes leading up to kick-off, the Parents threadbare squad were missing subs.

It (the gamesmanship) continued with the WO coaches having the kids tear-up vast swathes of the pitch – clearly a wilful and deliberate ploy to put the Parent off their stride.

Two Superman-esque changes (stripping off in the equipment shed) from the European Transfer Window signings brought some respectability to the Parents squad. Those and the lad with the borrowed Orange boots and Chinos. The ten of the Parent would face the 12-13 of the coaches. Still, the average age of the parents still far exceeded the Coaches despite their superior squad-size.

The Parents were set with a festive formation (3-2-1) (non players may need some help with that) as selected by Player-Manager May were ready and warmed up – alas, the gamesmanship continued with the coaches using more delaying tactics to push the kick-off back. May had gone with experience and size at the back – mobility in midfield and pace up-front. Clearly lacking any coordinated strategy, the WO coaches looked at each other for what felt like hours until the boos from the spectators began to grow and Wale came into view…..we were off.

A cagey first 15mins – largely devoid of any skill or guile from a WO side who clearly thought they were playing on Premier League pitch, was lit up but a Parents Team who looked like they had been playing together for years and had adapted quickly to the conditions – May in goal at this point, dictating play from deep and the back three of Christian, Eddie and Marty finding space on the flanks and creating space behind a sleep-walking WO midfield.

The key moment came with a change in keeper for the Parents and moments later May found himself unmarked as a loose ball bounced (surprisingly) 6 yards out. With some poor finishing on display from WO, none would have been surprised to see this effort balloon over the bar or roll tamely into the WO keeper’s arms but rolling back the years and pivoting like a ballerina on his left foot – the half-volley lashed of the laces and into the WO –net.

The celebration will live long on the memory (mine at least) and clearly ruffled a few WO feathers. Game on.

Eddie, now between the sticks for the Parents – was called into action almost immediately as WO sought a response but his cat-like reflexes and total disregard for his classic white Fulham jersey held firm to keep WO at bay for the immediate onslaught.

WO pressure subsequently build – and, nobody really knows how, found an equaliser through a combination of good luck and mastery of the dark arts. 1-1.

The response from the Parents was immediate. Their mastery of the conditions; tactical discipline and superior execution shook WO to the core and two-quick fire goals followed as the rain started to come down harder. 3-1 to the Underdogs. The midfield engine of Gary and Roger instrumental in breaking-up play and Ghislaine  looking dangerous on the shoulder of the last WO defender.

A disgruntled Parent (White Socks, big lad) who had chosen to play for WO was furious and despite putting himself for what felt like (and actually was) a further 15 mins (was meant to be 25mins per half) – the ‘half’ ended when it was obvious WO needed to reset with no chance of scoring. Official timekeeper had the first half at a monumental 34mins…..the gamesmanship continued and arguably took a turn that would swing the game back in WOs favour – more about that in a moment. The slow-clap as WO left the field no more than they deserved after a woeful showing.

The half time team talk for WO was clearly a heated affair with steam rising for all to see. The youngsters wide-eyed as clearly the first-half performance fell well short of the standards expected.

Tails were up (along with blood-pressure) in the Parents camp – but again the experience shone through with players resting and focusing on keeping the basics simple and playing to the conditions and pitch…….and pitch.

Both teams came out and started brightly – WO preferring to push their two biggest and most experienced players up-top and the Parents continuing to play good football out wide and getting in behind the static WO defence.

Goalscoring opportunities were at a premium and with their first touch deteriorating, particularly the lad in the white socks, WO heads started to drop……then quite literally, someone moved the goalposts……….

Unprecedented in most observer’s football experience – WO Management moved pitches. Open mouthed – the Parents could not believe what was happening but fearing a rise in monthly subs, went along with it to keep Comrade Chairman Kim-Jong Wale from creating an international incident.

Perhaps it was the shock of moving pitches, or the long ball tactics WO started using, the game quickly went to WOs favour, coming back from 3-1 down to lead 5-3 courtesy of some rather unfortunate goalkeeping from the Parent’s team RNIB registered stand-ins.

Persevering with their brand of robust defending and attacking down the flanks, the parents responded to 5-4 before a cracking WO goal to make it 7-4 seemed to put the game to bed.

With WO players calling for the final whistle, the Parents scored deep into injury time before Kim- Jong Wale summoned the weather satellites to deliver the hail he had been praying for since WO had got their noses in front.

The celebrations were wild from WO and the defeated Parents honourable in defeat but with a moral victory. Helen Quinlan handed the trophy over to WO Management as talk quickly moved to a rematch on a certified 4G pitch with VAR and goalline technology.

Thanks to everyone for a great afternoon and keeping the WO family alive through what has been a challenging 2020.

Match Report by: Peter G. May