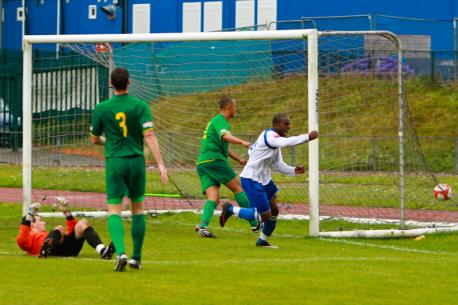 PLAYERS and staff at Waltham Forest FC are calling on residents to support them this weekend when the club faces the biggest game in its history.

The plucky non-league side, whose players are a mix of office workers, gym staff and students, will play Eastbourne Borough in the second qualifying round of the FA Cup this Sunday (October 2 at 3pm) after a string of surprise wins.

Their 2-0 victory over higher-placed Hitchin Town in the previous round has been described as a “giant-killing”, and the club are now tantalisingly close to playing some of the top teams in the country.

“Manchester United at Old Trafford would be a good one,” joked manager Olawale Ojelabi. “But we’re taking it one step at a time. We’re very excited about this weekend and it would be a massive boost if the community could help come and support us.”

The team has experienced a remarkable turnaround in recent months thanks to the efforts of Mr Ojelabi and chairman Isaac Johnson. In contrast to last year’s disastrous performance when it finished bottom of the Ryman Division One league, the club is now third in the table.

But life is still a far cry from the multi-million pound industry of top-flight football.

“The players only get expenses and on Saturday we will have to contribute to Eastbourne’s travel costs and the officials, so it would really help if we could get some more fans down to the ground.

“We can get 70 people on a good day but it would be great to have some extra support.

“We’re really excited and pleased at how things have gone, hopefully we can progress even further in the cup,” he said.

The club plays their home games at Cricklefield Stadium in Ilford and is currently in long-running negotiations over moving back to the borough at Wadham Lodge in Walthamstow.

Mr Ojelabi added: “We want to make it feel like a home game and intimidate Eastbourne, so we would be very grateful for any support we can get.”